Posted on August 29, 2015 by talesfrommahahual

I have to admit, I was not very good at science in school. To graduate from the University of Texas at Dallas School of Arts and Humanities, I was required to take one science class, so my last semester, having not fulfilled that requirement, took something called “Environmental Science for Non-Science Majors”. It sounded like something a dumb wad like me could get through, which I did, barely! Why am I telling you this? Because I’m about to get “all-sciency” on you and I, unlike most of the people I have been reading on the internet about the current sargasso (sea grass) problem in the Caribbean, am going to tell you up front, I know nothing about science. Most of it is over my shallow little head actually. But after about 14 months of dealing with the sudden influx of sargasso the Caribbean and Atlantic have had, I’m becoming a bit of an expert on the stuff and here is what I do know. I know it is heavy when you lift it, stinks when you pile it and it cost a lot of money to remove it, once you do pile it. I know that the science egg heads, that are so much smarter than I, are finally close to declaring the cause of all this as a cocktail of variables coming together in some different fashion; water temperature, chemical changes and massive eutrophication, and I also know that it is not as bad in some places as some are saying. So, having said all that, here is my update.

First, if you have not read my blog from a few months ago on this subject, you might check it out and go to the links by the Sargasso Sea Alliance for a very good short discussion on what the grass is and its history. Today, almost 14 months into the massive volume change we’ve experienced, we are in the “coming to terms with the problem stage” of dealing with it. Up until now, we have all been operating in “panic mode stage”, frantically trying to remove the sargasso, so tourist can enjoy why they come to this part of the world to begin with, the beautiful beaches. That panic mode would be the rake, pile and haul work I mentioned above that I am such an expert on these days. But before anyone can come up with a solution beyond that, the source of the problem must be identified, so that either a long term or short term solution can be developed. If the problem is one that will not be going away anytime soon, the government might invest in industries that use the sargasso as a raw material for the production of things like fertilizer, medicine, food or even oil. There is no end to the things sargasso is useful for. However, subsidizing manufacturing plants and logistical networks for a product that is the result of a short term problem, is not smart. If the problem is going to end and the sargasso goes back to its more natural rate of production, the smart thing is unfortunately, to keep doing what we are doing. Science guys, we are waiting on your answer!

From my very unscientific bar stool though, it appears to me that the source of all this sudden growth is the above mentioned eutrophication. Simply put, this is when what runs off the land into water, changes, usually not for the better, the water, causing an unintended consequence, like lots of sargasso. The land poisoning the water so to speak. In this case, there is most likely lots of blame to go around as coastal countries dump and spew who knows what, and wetland destruction continues everywhere. However, the 10,000 pound gorilla in the room, the variable that changed dramatically about the time the sargasso problem began to rear its ugly head, is the change in the discharge of the Amazon River. Coincidentally, a second sargasso sea has now formed in the lower central Atlantic as a result of something called the North Equatorial Re-circulation Region, and that is where our grass is coming from I’m told. Coastal areas north of the Amazon’s mouth, the direction the ocean currents take discharge, are now also covered in Sargasso, something that until all this started, did not occur at all in some places, or like our area, experienced only a short and small seasonal amount of sargasso.

What has changed? In the last few years, Brazil has built several new power plants on rivers feeding into the Amazon, which ultimately feed into the ocean. In order to build these dams, the areas around them needed to be flooded and the result was millions of acres of newly flooded areas, all producing and spewing large amounts of new and different mineral bi-products, as the vegetation decomposes and sediments from rich top soils flowed through the dams and eventually into the ocean. The result was much like when you dump fertilizer on the lawn, it grows like crazy. The sargasso did the same. My hope is that once the initial massive discharge from these newly flooded areas is done, the rapid and, un-natural growth of Atlantic sea grass will also be done. Again, I’m not a science guy but I do know that if I fertilize my garden, it grows fast. If I don’t, it grows slow. 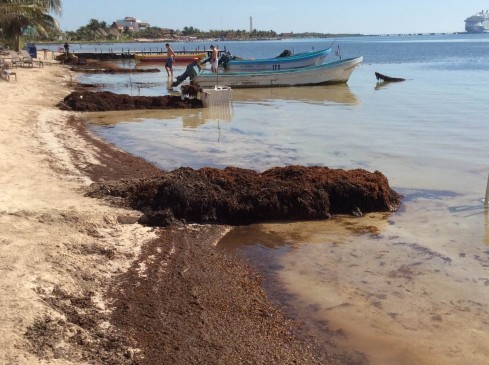 So what are we doing in the interim? I can truthfully say we are working our butts off, and getting better as time goes, in how we deal with the two main problems coming from the sargasso; the smell and the un-sightly appearance. The government brought in $150 million pesos of emergency money for the state, about $10 million US, and since that money began to flow, we have found a clean-up rhythm that, although far from perfect, has made the downtown beaches acceptable for most tourist. The remote beaches, where the reality of a strapped budget is that no clean up can be done, have not been as lucky. Heavy machines, skidster and front end loaders, are now removing the staged piles every day or two, so the stinky gas build-up that we had so bad at first in town, is much better. The high density of local beach clubs in the downtown clean their beaches daily and the extra staffing, and costs that go with it, are slowly working themselves out as well. No worry, the downtown beaches are such that tourist can always find a clean beach to relax on.

Clean-up on a Low Volume Day

So what will you find the beaches to look like if you come to Mahahual today. No telling actually. Some days the sargasso comes in so heavy, even the downtown beach clubs can’t pick it up fast enough. Some days we get none. It also depends on when it comes in, and how it comes in relation to a high or low tide. Patches that come in during a low tide, tend to divert and funnel toward openings in the reef, causing build up at the two ends of the downtown only. These areas have always been the collectors of sea grass and trash, and even the source of a nasty sea smell from time to time. Of course, those same areas are now the worst, almost impossible to keep clean, so they often really smell bad. People walk, and bicycle by them, smelling the strong smell and often telling all the town stinks. However the reality is that if you go 50 feet past these areas, the smell all but goes away, especially now that the rest of the downtown is better maintained.

A Cleaned Beach, Ready For A Fun Day

If the grass comes in during a high tide, it flows over the town’s barrier reef and is distributed equally along the downtown area, and on most days, it is picked up by each business’s staff. There are still a few areas of beach though that are not used by a business, and those areas can get small build-ups too. Manual labor crews have been going through and cleaning those, but the cost reality for that is that they can’t keep those areas as clean, and depending on how the grass accumulated, it can also smell, but not always. Sometimes it looks bad, but actually does not smell because of the way the grass dries on the beach. Grass that comes in as the high tide is receding, tends to dry out faster because it is distributed thinly as the water recedes. Grass that comes in as a high tide is peaking, will pile up thick, and if it is not removed, will begin to stink pretty quick. Having said all that, most days the downtown sea grass is maintained and most places do not have a smell. The two ends of town will probably stink until the problems ends or a long term solution is implemented. Just don’t hang out in those areas.

And what about the remote beaches? Again, it depends on where you are and when you are there. Some areas, because of their directional orientation in relation to the ocean currents, get almost no sea grass. Then, just a kilometer away, the grass might be 5 feet high and stink to high heaven! The remote areas have seen some of the worst conditions, and again, because the cost reality is such that the government can’t afford to clean those areas at all. They instead, must rely more on a natural process to do it for them. It is slower and doesn’t work as well, but remote beaches can be better on some days than others because of ocean variables. The best ‘cleaner” for the remote beaches is a very rough sea, and a high tide at the same time. This pushes the grass up onto many beaches much further than normal, leaving the high tide build-up further onto the shore and the water line clean as the tide goes down and the ocean calms. The sargasso is mainly water, and because it dries away from the water, it decomposes faster and quickly becomes a small line of almost nothing, that eventually blows away. Since most of our remote beaches are uninhabited, it raises the question, if sargasso is decomposing on a beach, and nobody is there, does it still stink? Perhaps another blog.

I don’t want anyone to think I’m trying to gloss over a real problem, because I’m far from doing that. I’m just keeping the discussion real, because some of what I hear made it sound much worse than what it really is these days. We have our good days and our bad days, and there lots more good days than bad now that we are getting better at how we do things here. It is a still evolving problem, and therefore takes some time to deal with, and trust me, Mexico will do so and will do so in a smart, but in a cost real manner, just like they do with hurricane relief and infrastructure projects, like the Costa Maya itself. But to come up with the proper solution, they must first identify the problem, and then determine if a long or short term solution is needed. That will take time and again, we are getting better at dealing with it each day.

The Tropicante Beach Club, Like Most Downtown Places, We Clean the Beach

But most important to remember while you consider all this; no matter what, the water is still blue, the sand is still white, and the drinks are still cold. The food is still great, as is the diving, the fishing, the snorkeling, the hotels, the music, the friendly faces, the shopping and on and on. No worry, we got this!

Stuck in Paradise!
View all posts by talesfrommahahual →
This entry was posted in Mahahual News, Mahahual Visitors Manual. Bookmark the permalink.